Being in worship is hard stuff for me. I mean, literally being there is hard, but also being in a state of worship. Even once I get myself to show up and find a spot, I can’t seem to be in that present state of being in worship. You know, like feeling God’s presence.

The last time I’ve felt God clearly via worship was last year while in my old campus ministry. This feeling likely came from a feeling of safety and comfort, as well as some kick-butt worship singers (AKA Erin). After that year though, I started losing faith and security and just an overall state of like for the ministry I was a part of. I left it, and in doing so, lost the worshipful spirit I had been experiencing each Thursday night. I don’t regret my decision to leave in any way, but I do miss the feeling I got from God during those evenings in the Great Room.

I’ve definitely been to great churches in my day. I definitely have been to great churches where they have wonderful worship. Neither of these statements are in question. However, one thing I’ve learned, to quote Jimmy Needham, is that “worship is more than a song”. As a recovering control freak, my biggest challenge is letting myself go. Worship, to me, means letting oneself go, giving that self to God, and letting Him guide you. I love a good chorus of “How He Loves” as much as the next millennial church goer, but to say that I can worship to it, that requires much more than a general liking for the beat and the lyrics.

Maybe my introverted ways cause my ‘worshipping God comfort zone’ to be writing in my Jesus journal. Actually, it probably does. The cool part about that, in my mind anyway, is that I can be with God alone, on my own time. Nobody has to know about it, and actually, nobody will know about it, because that’s super rude if you read my journal. Don’t even try.

There is a part of me though, and probably a part of all of us, where we want others to see us in the presence of God. Or maybe not so much the seeing us as it is being out in the open when we’re chilling with God. That’s your typical church worship. People gather in one place to sing praises to the God on behalf of themselves and the congregation as a whole. It’s a situation where we can let go and let God, not worrying about the person next to us can hear our awful voice, or wondering if now is the appropriate time to lift those hands up in typical evangelical fashion (both of which I do in the norm, by the way).

This state of being was both taught to me and lost by me while I was part of that campus ministry. I’ve learned what a blessing both were to my life, because now I can clearly understand and grasp the meaning of worship. Ever since I left, I’ve been constantly searching for the same experience.

This past Thursday night, I attended the Rock and Worship Roadshow, a Christian concert touring across the country. The show featured some really amazing artists; Jon Guerra, I Am They, Group 1 Crew, Jamie Grace, Crowder, Tedashii, and MercyMe. Those are some big names, guys. Check them out. Being an Alaska girl, no big names are about to fly up to the barren fields of Alaska, so I was low on concert experience. In fact, the only other concert I’d attended was a has-been in Montana, which probably could have been classified more accurately as the first opportunity of the year for college kids to make poor, drunken decisions. So to make my point, this was a huge deal for me. I’d been planning it since January, when I first heard about it on the radio. Finally, I was there and excited. Jon Guerra, one of the artists performing, passed out cards as we were waiting in line, getting me hyped for the night that would unfold. I was expecting a fun night of ‘Christian-celeb’ sighting.

It’s a bit of a weird experience to go from hearing these songs on KLOVE in the car on the way to work to seeing the artists who sing them performing in front of your eyes. That night, I jammed out to girl power ballads courtesy of Jamie Grace, clapped along to a ‘hoedown’ rendition of a Crowder song, and even unconsciously had some rap-like head bobbing going on during Tadashii’s rapping. He’s a Yankees fan, so I’m not embarrassed quite as much as I should be. I spent three plus hours in front of some of the very same people who had been my ‘bowling bumpers’ in my faith. These artists not only produce some awesome songs, but they also live lives which inspire, because they so clearly reflect true Godly relationships. Bart Millard of MercyMe was just one of the many examples of this. He so openly shared about how many crappy things he has done, and how many times he tried to be that perfect Christian, only to recently find out that there’s no possible way God could love him more or less than he does at this moment.

For the first time since last year, I was able to worship, to really worship in God’s presence. The fact that I went alone might have eased the process, but I felt myself completely content, not caring whether the woman on my left was standing or being paranoid about whether I was being watched or judged. God and I had our own little hangout sesh, complete with singing at the top of my lungs and regretting it in the morning as I had to coax myself to swallow my food at breakfast.

I found my worship! 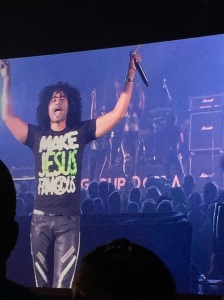 I know the search isn’t over for the next source of group-wide-feeling-God’s-presence, but for now, I’m happy, and I’m reminded of the joy that comes when people worship alongside one another, unashamed and beautiful. Let us never give up the search for those moments, no matter how we’ve been hurt or broken or how much we’ve grown apart from the church. Here’s the cool thing about the church. We are it. We can’t escape God’s love, and there’s always going to be someone to share that love with us in a meaningful way, even if it means visiting a new building on Sunday mornings.

Happy Thursday from half of our animal kindom!
A great mail day thanks to @emmykegler ! Can’t wait to dive into this new book!
May we go out into the world honoring the baptismal waters that serve as reminders of God’s active grace in our lives.
Not pictured: the inordinate amount of powdered sugar on our shirts from our beignets.
How it’s going vs. how it started:
"For it is plain as anyone can see, we’re simply meant to be." — The Nightmare Before Christmas