Since, then, we have such a hope, we act with great boldness, not like Moses, who put a veil over his face to keep the people of Israel from gazing at the end of the glory that[a] was being set aside. But their minds were hardened. Indeed, to this very day, when they hear the reading of the old covenant, that same veil is still there, since only in Christ is it set aside. Indeed, to this very day whenever Moses is read, a veil lies over their minds; but when one turns to the Lord, the veil is removed. Now the Lord is the Spirit, and where the Spirit of the Lord is, there is freedom. And all of us, with unveiled faces, seeing the glory of the Lord as though reflected in a mirror, are being transformed into the same image from one degree of glory to another; for this comes from the Lord, the Spirit.

Therefore, since it is by God’s mercy that we are engaged in this ministry, we do not lose heart. We have renounced the shameful things that one hides; we refuse to practice cunning or to falsify God’s word; but by the open statement of the truth we commend ourselves to the conscience of everyone in the sight of God.

We talked last week about how things were changing very soon, and how very soon, we’d be asked to respond. Well friends, things have changed. If you have not yet heard, the United Methodist Church has met and they voted to adopt the traditionalistplan, a way forward that continues to ban gay clergy and same-gender weddings. In a vote of 438 to 384, the traditionalistplan has been affirmed, and will be in place until/unless it is ruled unconstitutional. There’s a lot of church hierarchy language to that, so I’ll say it in English- The church is broken.

Now, I come to you today as a person who is fully affirming of LGBTQIA+ inclusion in the church. That shouldn’t be shocking unless you’re new here. And I recognize we are all in different placeson this topic. I acknowledge that some of you may even be happy with the decision, that some of you had hoped this plan would be passed. And that is your choice and your freedom.

But as your pastor, I cannot stand up here today and tell you that I think this is what God wanted. I cannot even fathom a world where that would be true. And as a spiritual leader, who has been trained and commissioned to listen for God in the church, and to communicate the story of Jesus with congregations like you all, I need to be honest with you and say that I am angry, and that this feels to me like a big abuse of power. 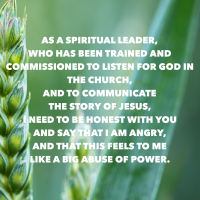 I’m not so much angry that there are people, even in this congregation, who believe something different than I do about the Bible. I respect the complexity of scripture, and how it speaks to all of us in different ways at different times, depending on our identity and our culture. I’m angry because there is no doubt in my mind that every single one of us deserves to be invited, included, and allowed to fully participate in the church. And we, this week church, we voted to say no, that is not true. Some of you are not welcome. 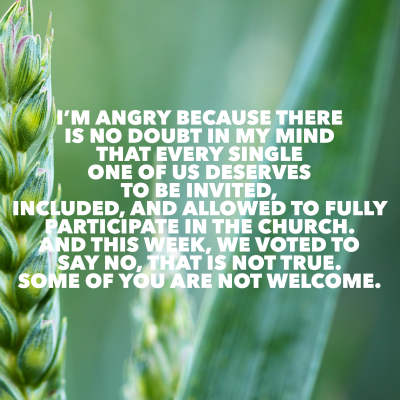 As I sat watching the livestream, the moments on the clock counted down to the time the conference would be over, and the UMC would need to clear the space for the monster truck rally that was coming to the arena next (a true story). As I waited, I wondered how I would respond. How can I both communicate the news, and also communicate the good news, in such a time as this?

And then I read the scripture. Imagine that- the Bible can provide us with words when we have none.

In the end of 1 Corinthians, Paul is writing to the people of Corinth, and tells them they need to be prepared.

“Keep alert, stand firm in your faith, be courageous, be strong. Let all that you do be done in love.”

Something is about to happen. As we move into 2 Corinthians, it happens. Paul now has a different role. He’s not warning anymore. Rather, he’s coaching folx on the question of ‘what now’. Our scripture today begins with Paul offering hope, a hope that comes when we act boldly. The kind of boldness he’s talking about is acting in opposition to that of what the law of Moses is telling them to do. He said Moses put a veil over the people from Israel, so they could not see the glory.

But the Holy Spirit, Paul tells us, is the one who sets that veil aside, the one who allows us to see the goodness and the holy, and the image of God in all that is before us. God offers freedom to those who look at this glory fully, who can pull the veil off in order to see the richness that is the kindom of God. 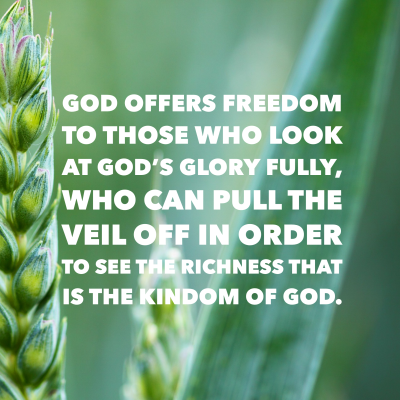 Paul reminds us that we are here, in ministry, because God brought us here. We aren’t doing the work by coincidence, or because we’re the only people left that could do it. We are here because this divine being imagined it.

Verse 2 of chapter 4 says that “by the open statement of the truth we commend ourselves to the conscience of everyone in the sight of God”. I don’t see any exclusions, exceptions, or descriptions in that verse. God sees everyone, and God sees truth and goodness in everyone.

The United Methodist Church has put a veil on right now. It’s been on for quite some time, and this decision we made this past week further shows that there is no intention to take the veil off, by the church majority, by those who are represented in the 438 votes who voted for this traditionalist plan. 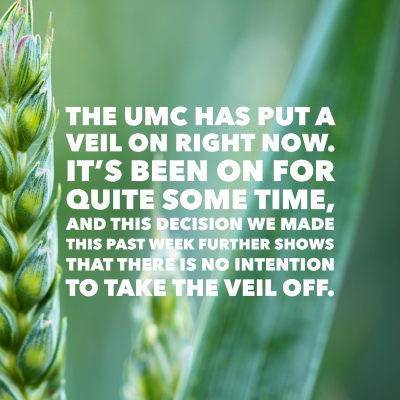 Even amidst this statement that has been made, when we look, we can see glimpses beyond that veil. This week even, some pretty ‘kindom of God’ things happened. On the General Conference stage for the very first time, ‘I am a gay man’ was spoken aloud. Delegates spoke in favor of a plan that allowed for diversity of opinion, even though they believed in what the Traditionalist Plan offered. Prayer and witness and deep listening took place from beginning to end, with bishops, delegates, clergy, laity, and observers together. Thousands of young people stood up and made a statement for diversity of opinion, where they revealed themselves as the future of the church. We saw what could be, when the veil is lifted and God’s fullness is revealed.

In the final moments of the conference, our Western Jurisdiction delegation spoke from the floor to say that they as a leadership body, would be continuing to live and act as one church, as a body of believers with diversity in opinion and diversity of identity. We as the Western Jurisdiction have seen what it’s like to be under that veil, and we’ve also seen and practiced what it is like to remove it, and to see the fullness of God and the Holy Spirit at work. And I am thankful for our leadership, for discerning what that means for us moving forward, as we take bold steps in our faith. 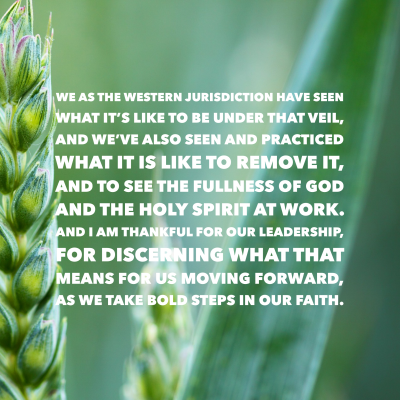 A preaching professor told me that if I couldn’t think of what to preach on,then do this. Talk about where you’ve seen God recently, say something true about God from scripture, and then sit down. Well, I’ve already messed that up, but it’s not too late to close with that.

I’ve seen God this week, through the ways people come together, amidst chaos and confusion. I’ve seen God in the crying out, the anger, the stories, the small celebrations, and the togetherness of mourning. God spoke this week, and the votes that occurred can’t take away from that.

And here is what I know to be true about God, from our scripture today. God is bigger than we often allow God to be. God, through the Trinity, makes themselves known in the complexity of people who make up God’s Church. God invites us to lift the veil to see the freedom found in the spirit of God for all people.

So friends, as we transition from this time into our time of holy communion, may we be rooted in our collective wholeness, in the wholeness of God who each of us were created by and for. As we gather around this table today, may we lift the veil, to rid ourselves of notions of who is in and who is out, who is included and who is excluded, and especially who is compatible and who is incompatible.

Because the reality, and the good news, is that each of you is called.

Each of you are good.

Each of you are invited to this table today.

I say this every time we take communion, but today, it is especially important. This is not my table. It is not your table. And it is not the United Methodist Church’s table. This is God’s table. This table is a place open for all who love God, all who want to know God, all who doubt or question or want to know more. It’s a space for all who are rejoicing or mourning or angry or excited or terrified. No matter what, you are invited to this table today.

This Sunday, the table serves the same purpose it always has, but for many, it will take a very different form. This Sunday, may we be intentional about reminding ourselves who the table belongs to, and who is invited.

All invited. All celebrated. Period.

The open table of Christ is not subject to a vote. And neither is the story of Jesus. Amen. 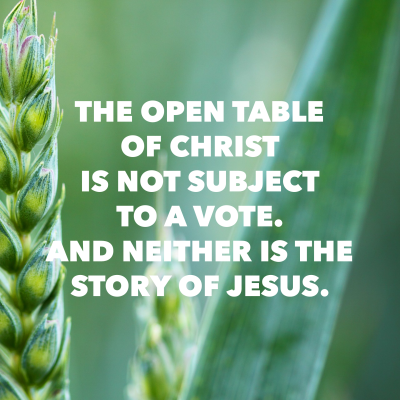 One thought on “With Great Boldness”

Leave a Reply to An Inspired Photojournal Cancel reply