After he had said this, he went on ahead, going up to Jerusalem.

When he had come near Bethphage and Bethany, at the place called the Mount of Olives, he sent two of the disciples, saying, “Go into the village ahead of you, and as you enter it you will find tied there a colt that has never been ridden. Untie it and bring it here. If anyone asks you, ‘Why are you untying it?’ just say this, ‘The Lord needs it.’” So those who were sent departed and found it as he had told them. As they were untying the colt, its owners asked them, “Why are you untying the colt?” They said, “The Lord needs it.” Then they brought it to Jesus; and after throwing their cloaks on the colt, they set Jesus on it. As he rode along, people kept spreading their cloaks on the road. As he was now approaching the path down from the Mount of Olives, the whole multitude of the disciples began to praise God joyfully with a loud voice for all the deeds of power that they had seen, saying,

“Blessed is the one

who comes in the name of the Lord!

and glory in the highest heaven!”

Some of the Pharisees in the crowd said to him, “Teacher, order your disciples to stop.” He answered, “I tell you, if these were silent, the stones would shout out.”

Each week, as I sit down to think about a sermon, the first thing I do is look at the lectionary, the sort of assigned readings for a particular week. Some weeks, I’m pretty happy about the texts I see, and other weeks, I think to myself, ‘why did this text get chosen, and what kind of sermon do they expect me to write out of it?’. But no matter what I think of them at first glance, they’re going to vary year by year.

The lectionary is laid out into three years, years A, B, and C. We cycle through these three years, each week having certain readings assigned to it, according to the seasons and the years. We are in year C now, and so even when we are in Lent or Advent, celebrating stories that really don’t change, like Jesus’ birth or the resurrection, we hear different accounts.

Today is Palm/Passion Sunday. Last year, you all will have read the Mark telling of this parade that happens as Jesus rides into Jerusalem, and the year before, year A, we all would have read the Matthew account. Both of those two mention the parade, the riding in on a colt, and they also mention the waving of palms, hence Palm Sunday. It’s told in these two accounts as this celebratory event, the waving of the branches symbolizing freedom and liberation.

This year, it’s the author of Luke’s turn. The parade that ensues is simpler, in Luke’s telling. Often, we have honored today by waving palm branches in this victorious act. And as we read Luke’s version of the parade, the palms aren’t mentioned. Instead, the act described is the spreading of cloaks on the road. The folx gathered are quite literally laying down their possessions, pieces of themselves, in order to prepare for Christ. The palms aren’t mentioned.

This isn’t to say that one way actually happened and another didn’t. It’s not to say that the palms have to be included or they aren’t allowed to be included. Rather, we can learn today, that in addition to the celebratory moments, the waving of palms, we can also honor this Sunday, as we enter holy week, in a complementary manner, looking to this parade as a means of grounding too.

Sometimes, the act of celebration, the act of parading around waving our palm branches can take us away from our preparation, or can make us forget that in addition to the palms in the other two accounts, there were other elements to this story. Instead of allowing the parade to take us too far outside of ourselves, we can remember the cloaks being thrown on the ground for Jesus and the colt to walk over, this literal grounding element that reminds us that we must lay down things as well. 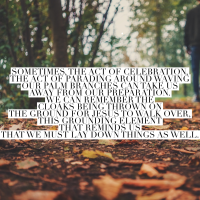 Our passage starts out today with Jesus traveling, heading towards Jerusalem. It has been a long journey. As he was getting close, Jesus asks two of his disciples to go borrow this colt for Jesus to ride in to Jerusalem on, and if they get questions, to say ‘the Lord needs it’. Each of us too, like the colt, are needed by Jesus. We’ve talked a lot about our gifts, and how they contribute to this parade so to speak, this Easter people moment. Jesus needs us.

Once the disciples have this colt, they get Jesus settled on it, and he began to ride into town. People obviously noticed him coming, or knew about it ahead of time, because there were people gathering. As Jesus came towards them, people took their cloaks off and spread them out on the ground. We can take a moment here and think about what that act may have been about. There’s certainly some humility involved, people giving of themselves for Jesus, and doing so by putting their cloaks on the ground for Jesus to walk over. The people are putting themselves in a vulnerable position, removing part of their clothing and being exposed to whatever weather was happening. My instinct is to imagine it was a sunny day as Jesus rode in, but for all we know, it could have been raining or cold out that day. It also was a very sacrificial act, this moment of giving up something of value for their leader, an offering of sorts.

As the cloaks were being laid down, the people began to praise Jesus, amazed and in awe of the one who was before them now in real life. They had heard stories, and maybe had even been lucky enough to see what Jesus had done, and now they have the chance to honor him in this way, through this parade. The parade was both a celebration, and a realization, a point in the timeline about what was to come, even though people didn’t know yet.

Like the parade, the palms and the cloaks, Lent is about balance. It’s about balancing past and future, life and death, joy and sorrow, hope and despair, etc. There’s a beautiful balance that happens when we can confront both extremes, two sides of the same coin. 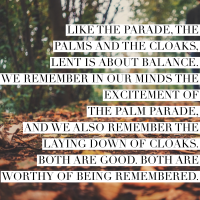 We remember in our minds the excitement of the palm parade, and we also remember the laying down of cloaks. Both are good. Both are worthy of being remembered. As we prepare for Holy Week, we are reminded that God doesn’t make us choose one thing or another. We experience it all. 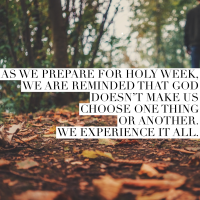 It’s like pie dough being weaved into an intricate lattice. The pieces at first glance are going in different directions. They don’t face the same way. One piece goes up while another goes down. Yet they weave themselves together to form this beautiful lattice. When we read the gospels, we are being invited into this similar weaving, God working through the text to teach us about the new thing that is happening. It’s not about confronting contradiction or choosing a single storyline over another. Easter is about honoring both the lifting up of the palm branches as well as the laying down of the cloaks, as God works to weave us into a community of resurrection.

So today, as we hear Palm Sunday, as we recall the flowy branches being waved in the air, we can think to those high moments in our journeys, those times of celebrations. And today, we also face the reality that today, Palm/Passion Sunday, is about remembering the times we had to spread our cloaks on the ground too, those times in our journeys where we gave something up, where we had to change, where we learned a difficult lesson. That is Lent too. That is holy too.

As we honor the story of Jesus today, and as we enter Holy Week, the week filled with the highest of highs and the lowest of grounding lows in our Christian story, may we avoid erasing the complexities. May we avoid our instinct to choose one or another, to throw away the scary or mundane or heartbreaking parts. Because God reminds us, through this story, that there is room for it all. And more than simply room for it all, God teaches us that through the highs and the lows, the branches and the cloaks, God is weaving together this beautiful lattice that will soon become a symbol of resurrection.

God of complexities and chaos, you have allowed us space to be many people, together as one body. As we step towards the end of our Lenten season, remind us of the journeys you’ve taken with us. Allow us to see the highs and the lows. Allow us to wave our branches and lay down our cloaks. Remind us that you are weaving something sacred in us, something that leads to resurrection. In your ever-working name we pray, Amen.

When I was 17, I got diagnosed with a bunch of autoimmune disorders that forced me to say no to things that other teenagers didn’t have to. It taught me to value and demand rest and boundaries, which is one thing I’m so proud of to this day. Here’s me enjoying my rest poolside today! How do you rest best?
When was the last time you put on a full head to toe work outfit? Wedges still have got nothing on my house slippers.
Jumpsuit and wings weather ☀️❤️
If he poops before the park, he gets to go down the slide with me.
Un-fort-unately, we’re very busy tonight. My theology books have never been put to better use.
Working on the second dose of those antibodies. 💉